This is Aftermath's response to my last post: Stigma. He felt the need to speak for himself, and I'm handing over the podium to him. Speak your mind love.

If We're Not Broken, Don't Try to Fix Us

It's always nice when someone writes something nice about you. Perhaps it is even sweeter to read than to hear; a stamp in cyber space for anyone to trip on and discover you. Reading the Agent's thoughts in Stigma, brought back some thoughts and feelings from when I first had The Agent in my "sights". I knew when I met her that she had children. "Yes, two kids,"
she said to me. Red flags didn't get in the way, I broke them long ago. Naturally, I was interested in her situation, trying to figure out just how she got to this point, what exactly was her perfect "fish" (fear not, it makes perfect sense to us). We both knew that in the beginning, what if's don't matter. We needed to see if we had chemistry before we began plotting to take over the world.

Not long before our first date, I had a conversation with someone. We talked about whether or not I should date someone with children. I thought that I could handle one child, if the person was a good fit for me. Of course she also would need to be capable of taking care of her child and not looking for a "daddy" or an ATM in Doc Martins. I didn't want my whole relationship with a woman to revolve around my duties to her and her child. To be honest, at the time, I was really searching for a solo act. Had anyone else been sat in my car, telling me "I'm a three piece meal", I'm not so sure I would have been interested. Those were not her exact words, but you get my meaning.

The Agent and I really connected in our initial conversation over the phone, some nights before. I don't remember being really scared when she told me that she had a family. I had my concerns: what happened in the past, why didn't it work out. I quickly understood. I went home that night and thought: "Hmm, two kids? I'm pretty sure I was at no kids right? Hello? Brain??" - and then - "What's that HEART? Shut UP Brain, Heart is trying to tell me something and I can't hear a FUCKING WORD over you!"

A week later I met the Agents in Training. I could not help but be amazed how open they were, willing to allow me into their little world. They insisted that I supervise the carpet landscape as they masterfully created skyscrapers, using the ancient block technique. Suddenly, I was foreman of this site, launching in on the importance of starting with a strong foundation. "Once we have that, my little under four foot friends, let's see what we can build". From that night on, I clearly saw the other side of the coin. That was just about three years ago.

Now I live with those underpaid block builders and one Double Agent. What they give me, I vow to spend the rest of this life returning. We might just be the lucky ones, even if no one wants to see it. It's ok. It's blinding to think sometimes, just how great things can be if you just give them a chance. Life in the Aftermath is a little different than it used to be. I have three to hug, three to kiss. I have three who depend on me. I have three perfect reasons to make it through a tough day at work. I have three smiles, well four if you include the one they've glued to my face. I have something that you cannot find on e-bay, or collect enough proofs of purchase to send away for. Something didn't work out for either of us, for a reason. I'm packing a suitcase for a place I've never been and they are all I won't leave behind. I vow to be here, building a strong foundation so that Thing One and Thing Two can build to the sky. 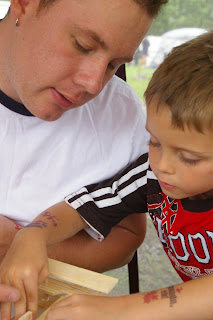 Labels: Life in the Agent's Scope, Living in the Aftermath

Ok, that? Beautiful. To use an old but perfectly placed cliche, anyone can be a father, it takes a special person to be a daddy and you got all the right makings. You have all my respect and admiration for listening to HEART and not BRAIN, cause I think HEART would have always been hurting for what it missed.

Aftermath? You remind me SO much of Daren...it's a beautiful thing to watch a man become a father and it matters not how he gets there. Take it from someone who was raised by a couple of Dads and a Papa.

NICE! job Aftermath!
just wanna say u might have 3 smiles...but remember I have 2 hands 2 hit u with if u ever break there 3 hearts!!!! Also remember that "vow" is one strong word! lol
I will just end with saying I love u 2 & I approve!